After the crazy, out-of-this-world spectacle that was Dismaland in 2015, who would have expected that three years later, the anti-establishment enigma that is Banksy would again find himself making headlines.

Early in October this year, one of Banksy’s signature stencilled paintings, “Girl and Balloon,” had been up for auction in Sotheby’s. As the auctioneer announced that it had just sold for £1,042,000, the piece – elaborately framed as if it were a polished work of fine art – beganto shred itselfon its own.

Everyone in the auction house watched in bewilderment as a beeping sound resonated across the room, amidst all the chatter, and the piece slid through the bottom of the frame in strips.

Banksy, via his Instagram account, shared a photo of the scene, and captioned it “Going, going, gone…” – echoing the heart-shaped balloon in the artwork as it  floats away from the little girl. It was also a cheeky shot at the auction process.

At first glance, one would immediately think that this was a brilliant move by Banksy – it was his way of mocking the art world and its absurdity – to prevent the commodification of his artwork. After all, who – in their right mind – would pay millions for a tattered piece, right?This is where Banksy (or anyone in their right mind) wouldbe quick to realize how truly absurd the art world is.

On Art and Meaninglessness

Artyfactory.com defines “Dadaism” as “a form of artistic anarchy.” As an art movement that had begun in the early twentieth century, Dadaism is the expression of disdain towards the establishment; a form of protest. Its focus is much more conceptual, as opposed to the aesthetic or crafting embodied by other movements such as Realism, Modernism, or Impressionism.

Dadaism, also referred to as “Dada,” came about as a reactionary movement to World War I. Instead of the usual fine aesthetics of modern society, Dada artists embraced the avant-garde. Irrationality and nonsense became the centrepiece of their works – to go against what had been considered the norm, such as the traditional values placed unto art. From visual forms, Dada also covered literary and aural works, thus birthing cut-up collages, sound poems, and found-object or readymade sculptures, among others. The movement had been the artists’ answer to the violence wrought on by the war, as well as the capitalist society encouraged by the bourgeoisie.

As the alternative to the seeming conformity in the art world,Dada was the sum of all rejections: the movement was anti-war, anti-establishment, and anti-art. It attacked the definition of “Art” – including its existing values and its purpose. Take, for example, how Marcel Duchamp’s “Fountain” (1917) – a readymade sculpture – had been staged at The Grand Central Palace in New York. A porcelain urinal turned sideways, signed with “R.Mutt 1917,” the piece stirred controversy in the art world as various interpretations came out to either justify it as art, or denounce it as hogwash.

Setting aside all speculations on the work’s intent, Duchamp submitted the artwork to challenge the event’s call – that the Society of Independent Artists would accept any submitted piece, given that the artist had paid the application fee. That said, the work was – in all its absurd glory – confronting the value of what can, or cannot, be considered as a work of art.

So, who then, has the final say on what is art; the artist, the critic, or the audience? This is where the paradox of Dadaism lies – even as the movement predicates itself on being anti-art, its pieces remain to exist, considerably, as works of art. And as it goes against the establishment that continues to uphold the system, the irony is that these landmark pieces,such as “Fountain,” are immortalized by that very same system – the art world.

The Commodification of Street Art

One can easily point out how the common denominator between Banksy’s recent brouhaha and the entire movement that is Dadaism is this statement: “Fuck the Art World.” 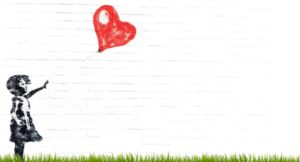 Similar to “Fountain” and its intellectual grounding of art and its value, “Girl and Balloon” serves to challenge the true value of art. More specifically, Banksy’s shredding of the piece as it was auctioned was a move to deny the art world of its capitalist take on the value of art. Dadaism postulated that 20th century art served to indulge the bourgeoisie. Today, provided that Banksy’s works have been fetching millions, the attempt at destroying “Girl and Balloon”and Banksy failing miserably is where the absurdity of the art world manifests itself; in how the shredded “Girl and Balloon” went on to grow in value.

Post-destruction, the value of “Girl and Balloon” has doubled its selling price, which was already the record-highest since a Banksy piece last sold in 2008. From £1,042,000, the cut-up version of “Girl and Balloon,” is now worth around £2 million. More than the piece being authenticated as a Banksy, its performative creation – the live destruction during the auction, furthered by all the media hype – has been credited by the art world to boost its value.

Like many of his other provocative acts, Banksy’s “Girl and Balloon,” as a work of street art, serves to be consumed by the public in the streets, not in any gallery. 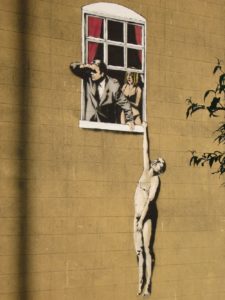 At its core, graffiti and street art, share the same values – taking up public space is among the primal elements of the art form. Sometimes categorized as “Urban Art,” graffiti and/or street art has always been, supposedly, a middle finger flashed at gallery spaces and its pristine, white walls. Essentially, street artists believe that people should have the luxury of enjoying art without the need to pay for museums and galleries. If advertising, such as those seen in billboards and posters are scattered everywhere, society as an audience shouldbe more than welcome to be bombarded by art. This is what most street artists aim to accomplish – to turn public spaces into a gallery-of-sorts. However, advertising agencies have also learned how to use the same guerrilla tactics employed by street artists to fuel their commercialist intentions.

To go against a powerful, institutionalized establishment such as the “Art World” – whoever they may be composed of; the artist, gallery owner, market, or critic – is truly an exercise in futility. In a world driven by this prevailing capitalist behaviour, artists can only keep creating, but they will eventually have to face the difficult questions, such as the nature of “selling out”; for what purpose do these artists choose to create art? If it is to shake the art world, then they are in for a daunting task that has yet to be achieved by any other. Banksy, for all his efforts, is choosing to destroy his own artworks, but all for naught.